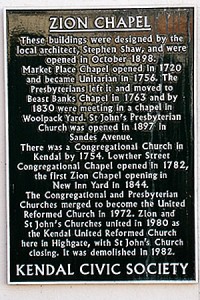 What follows below is based upon a document produced within Kendal URC some years ago. The webmaster would welcome comments and corrections to the information, and is particularly anxious to obtain more information on the chapel on Beast Banks which is referred to in the history.

Kendal United Reformed Church – Its origins and places of worship

The evolution of the Presbyterian, Independent/Congregational and Unitarian congregations in Kendal and the surrounding area is a complicated but fascinating saga of divisions and reforming.

We will be  giving information here about  the evolution of four main congregations which ultimately became, though not all existing simultaneously, St Johns Presbyterian Church, Zion Congregational Church, Lowther Street Independent/Congregational  Church, and Kendal Unitarian Church.

The Nonconformist or Dissenting movement came to the forefront of English affairs during the reign of Charles 1 and this is when we see the jostling between the Independents who were the backbone of Cromwell’s forces and the English Presbyterians who enlisted the help of Scottish forces in the struggle against Charles.

One of the first references to Presbyterianism in Kendal is to the presence of a Revd. Henry Massey around 1645, and he was probably the earliest Presbyterian minister in the town, appointed in 1646. An Academy for young dissenters was set up in Natland in 1662 under Revd. Richard Frankland. At this time dissenters were barred from Oxford & Cambridge Universities and these Dissenting Academies cropped up in areas where they felt free from any serious risk of persecution, to go about their business giving what was a university type education to young dissenters, many of whom became preachers.

Under the Declaration of Indulgences in 1672, licences were taken out for worship in private dwellings and a house in Fellside was used by the Presbyterians prior to the building of a chapel in Market Place (the Unitarian Chapel) in 1720. the Market Place chapel was built during the ministry of Revd Caleb Rotheram. In 1733 Rotherham started the Kendal Academy for educating dissenters. He was succeeded as pastor by his son, also called Caleb, in 1756. He ministered until 1796, but latterly as a Unitarian, and the building has been occupied by a Unitarian congregation ever since, and which holds the oldest non-parochial registers in Westmorland.

Until now the congregation had been under the wing of the Provincial Presbyterian Synod of Westmorland and Cumberland, but in April 1763, in response to the Unitarian preaching, the more orthodox members seceded from the Market Place Chapel and built a chapel on Beast Banks, with a burial area nearby  “the Scottish Burial Ground”.  The new Beast Banks congregation soon ran into further schism as the first minister there, Revd James McQuhae was censured by the hierarchy for daring to attend the induction of a minister belonging to another denomination! He responded by expressing his beliefs in the Independent principles of church government. He took some members with him together with £100 as their share of the property, and set up an independent meeting in 1772. There is some doubt about the exact location of their first meeting place. It is sometimes referred to as the Seven Stars Inn, but Gray states “…the seceders were still meeting in a large room at The Fold.. (where they worshipped until 1781)”. The Fold was a building next door to the Seven Stars. Another source states that it was in a vacated theatre in what we now call the Working Men’s Institute. However, there is no doubt that they ultimately built a chapel in 1781 in Lowther Street (formerly New St) and that remained their place of worship until 1929.

Going back to the Presbyterians on Beast Banks , their depleted numbers struggled numerically and financially, and they were forced to sell their building in 1812. Your webmaster is now unclear as to what happened to the Beast Banks chapel after this, and who worshipped there, although it does seem that it continued to be in use as a chapel. There are some references to this building being used by a sect called the Inghamites. It appears that the original chapel was demolished in 1845.  The replacement chapel is extant as apartments and now called Pear Tree Barn. The Beast Banks Presbyterians  moved for a short time into a room in the Crown Inn (now the Liberal Club) in 1823. Their next location was a disused theatre in the Woolpack Inn Yard, where it is said that they worshipped from 1823, at first surrounded by scenery and other stage trappings.

Revd. James Guthrie was ordained and inducted to the Presbyterians in 1840. We now come to another split. About this time the Morrisonian movement in Scotland was reacting against the prevailing hard Calvinistic doctrine. Guthrie was a sympathetic friend of Morrison. He was brought before the Edinburgh Synod and dismissed. He is reported as returning to Kendal in triumph to his flock, the large majority of whom seceded from the Presbyterians in 1843 and met temporarily in the Oddfellows Hall.

Having failed in a plea to regain possession of the Market Place Chapel they purchased land in New Inn Yard for £240 and the first Zion Chapel was built for £646 and opened in 1844. In 1892 they purchased Thompson’s yard, adjacent to New Inn Yard, for £2,300 and the much larger second Zion Chapel with its adjacent Lecture Hall was opened on 5th October 1898. The buildings of the first Zion chapel, which had already been substantially enlarged, were retained to house the Sunday School.  In about 1910, under Revd. James Groat the congregation joined the Congregational Union in England and Wales.

We now must return to the Presbyterians in the Woolpack Yard (originating from Beast Banks), who had recovered their earlier vigour. They retained their link with what was now the United Presbyterian Church of Scotland until 1894, when they were received into the Carlisle Presbytery of the Presbyterian Church of England. In 1897 they moved into the newly built St John’s Church in Sandes Avenue, which had been developed to mark Queen Victoria’s Jubilee. Both the St. Johns Church building and the second Zion Chapel building of the following year were designed by the same local architect, Mr Stephen Shaw, F.R.I.B.A.

By 1961 the Sunday School at Zion Congregational Church was so large that an existing smaller building behind the second Zion Chapel building was removed to make way for for the construction of a large hall, and the old chapel buildings in New Inn Yard were finally sold. They still exist and are now used as holiday apartments

In 1972, the Presbyterian Church of England and the Congregational Union in England and Wales merged to form the United Reformed Church. Both the congregations of St Johns Presbyterian Church and Zion Congregational Church voted to join the newly formed Church.  They both continued to worship in their respective buildings until 1980 when it was decided to unite the two congregations under one roof. The Zion Chapel building was chosen for this purpose. The St. Johns Church site was subsequently sold, the building demolished in 1982, and the site is now built over with apartments. The Zion Chapel building is now known as “Kendal United Reformed Church”, although a plaque outside placed by Kendal Civic Society refers to the earlier history of the site and building. Since then the United Reformed Church has continued the process of merger, being joined by the Reformed Churches of Christ in 1981, and the Congregational Union of Scotland in 2000.

The congregation at Kendal URC continues, but the beautiful Zion chapel building is now  far too big for the number of people now worshipping there regularly.  It is also very expensive to run and maintain, so the next phase of this story will undoubtedly begin soon.